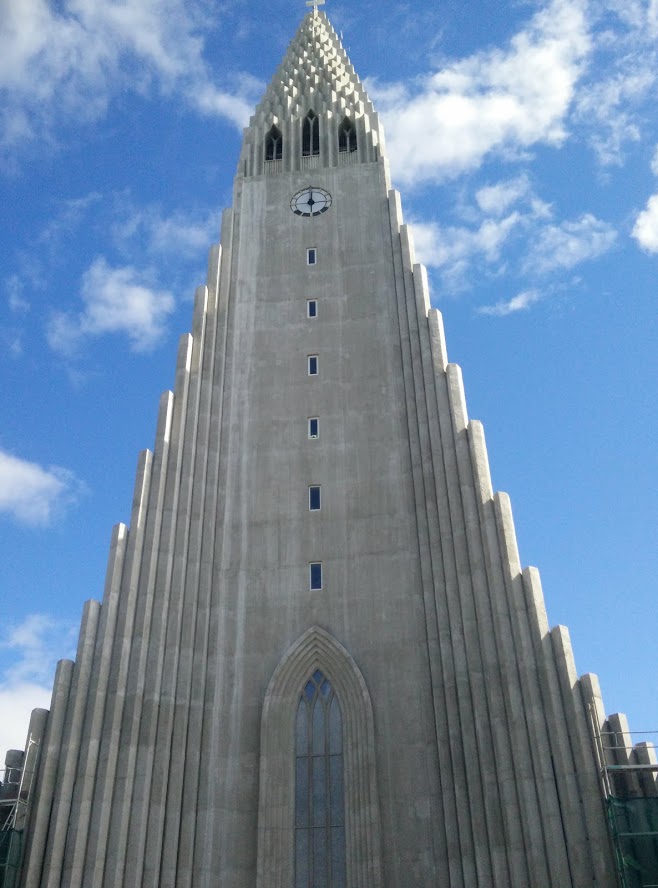 To make the most of our five full days in Iceland, the JJ family and our friends, the T family, decided to stick to the Southeastern part of the island. The ring road around the island is a perfect way to sight see with well paved roads and well-marked signage.

Our Icelandair flight from Boston would land in Keflavik Airport shortly before 6 am after a five-hour trip. Day One would be the hardest as the children and adults would have to adjust to the 5 hour time difference and sight see most of the day without being too tired.

Day 1: Dallas to Boston, and onwards to Keflavik airpor

Pick up rental car at Keflavik airport and drive to Gardur to see lighthouse, then onto the Bridge between two continents, Brimketill lava rock pools, Gunnuvher hot springs, stop at Grindavik for lunch before heading to the Blue Lagoon for an enjoyable couple of hours. Then onwards to Krisuvik Geothermal area and Kleifarvatn lake before driving to the hotel at Reykjavik. Overnight at Radisson Blu Saga hotel for three nights.

This would be another long day just given the sheer distances. We would start the day with a visit to the Borgarnes settlement center before driving west towards Eldborg Crater, Gerduberg Cliffs, Olkelda mineral springs, Vatnshellir Caves and lava tube tour, Snaefellsjokull glacier, Djupalon black sand beach, Saxholl crater, onto Olafsvik area and back to Reykjavik. This would be the longest day of our trip but perfect for harnessing the extra hours of sunlight. There are any number of small and large sights on this route and this area merits a couple of days sightseeing, in reality.

After the frenetic activity of the first two days, we settled for a relatively easy third day with adequate time to rise and set off late. The Þingvellir (Thingvellir) National Park would be our jump off point with an ice cream pit stop at Efstidalur, before heading to Geysir and Gullfoss. Then we planned to see smaller places like the Fridheimer Farm, Secret Lagoon, Skaholt church, Kerid Crater before turning back to Reykjavik.

After checking out of the Reykjavik hotel, we would drive to the Vik area, stopping at Seljalandfoss and Skogafoss before heading out to Jokulsarlon glacier where we had a glacier tour booked for the evening. Following which we would return to Vik for the night.

After a relaxed departure from Vik, we would stop by the Reynisfjara beach to see the famous caves/ basalt columns, Dyrholaey arch, Reynisdrangar rock formations. Then, return to Reykjavik to see the Hallgrimskirkja church, Harpa concert hall, Sun voyager sculpture, Althing parliament, City Hall, Perlans dome. The plan was to reach our guesthouse for the night, Alex Guesthouse near Kelfavik airport by 9 pm as we had to return the car and pack and prepare for a 5 am departure to the airport the following morning.

We chose an early morning flight to Oslo so as to reach there by afternoon with enough time to eat, rest and refresh before setting out to explore the local area. We chose to stay at the Comfort Hotel, Grand Central for its easy accessibility to the Grand Central/ Oslo S train station.  It is located in the Karl Johan Gate area of Oslo with pedestrian access to the Oslo cathedral, Stortinget-parliament house, Nationaltheatret, Nasjonalgalleriet and the Royal Palace.

Day 8: Norway in a nutshell

Norway is well-known for its natural beauty. The Norway in a Nutshell tour is conceived with the idea of exposing the tourist to the beauty of the fjords, the majesty of the mountains, the lushness of the valleys and everything in between. We decided to come up with our own version of the tour. We would leave on the 6:30 train from Oslo to Myrdal, then take the 20 km journey to Flam on the breathtaking Flam Railway. Then, the cruise to Naeroyfjord, eventually disembarking at Gudvangen. From there, we would take the Stalheimskleiva bus through hairpin bends to reach Voss and onto Bergen by train. This whole tour promised to be a spectacular experience and we couldn’t wait to experience it. In Bergen, we were booked into the Comfort Hotel, Holberg for two nights.

Set amongst picturesque fjords and mountains on the southwestern coast of Norway, Bergen is the old capital of Norway and its second largest city. We planned to spend the morning exploring Bryggen area followed by the funicular up to Mount Floyen for magnificent views of the area. Fantoft Stave Church is an early medieval wooden church that has been relocated and reconstructed. This would round out our must see sights in Bergen.

We booked tickets on SAS airlines to take us back to Oslo by 10 am. The rest of the day would be spent at various attractions including the Askershus fortress, Nobel Peace center, Viking museum, Norwegian Folk museum, Vigeland Park/ Frogner Park.

Day 11: Oslo to Boston via Keflavik, Boston to Dallas

Hope you will join us as we delve into this wonderful trip that we have planned.

One thought on “Iceland/Norway, itinerary”